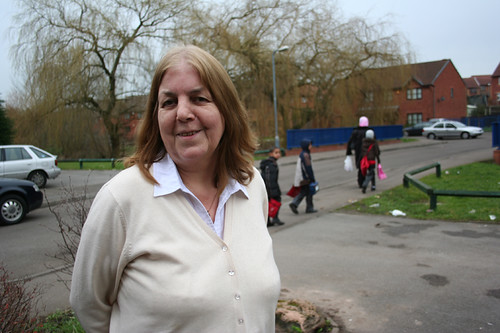 If you have a stinking brook in your front yard what do you do? Margaret Bannon of the Bordesley Green North Neighbourhood Forum took advantage of the Neighbourhood Performance Reward Grant (NPRG) – a £10,000 pilot programme – to allow residents groups more control over money. This youtube video shows you briefly what happened in Margaret’s neighbourhood and the audio podcast expands on what was done and what was learnt.

The NPRG was created by the Birmingham Community Safety Partnership and is currently being evaluated by the Digbeth Trust. Is there a solution to street racing in Birmingham? Masood Ajaib of the Washwood Heath based community enterprise Commpact thinks there is. He has signed up for an experiment to find a communal way of turning a dangerous Saturday night on Landor Street into a peaceful pastime somewhere safe. Listen here for the conversation or watch here for a sense of the problem: There’s an established link between grime and crime, which is why Kingstanding Neighbourhood Forum is using public money to crack crime one fridge at a time. This podcast and the youtube video you can see here or here explain how the forum has been using £10,000 from an experiment called the Neighbourhood Performance Reward Grant.

Run by the Birmingham Community Safety Partnership and the Digbeth Trust, this pilot has just come to an end. The reward is that meeting targets wil release a further £15,000 grant. Sustainable? Credible? Well listen and see what Les Smith and Rita Griffiths make of six months of the experiment.

A short film and a podcast, all part of a series of four pieces on an experiment on in Birmingham which is allowing residents a more control over how public money is spent. Here you can see and hear Neville Davis of the Sparkbrook Neighbourhood Forum talk about the pro cons and a huge effort they made to clean up rancid sites in their neighbourhood – all with a £10,000 grant from the Birmingham Community Safety Partnership and it’s Neighbourhood Performance reward Grant.

The four-neighbourhood pilot is currently being evaluated by the Digbeth Trust.