Aimee Coakley first came across the Hawksley “young vols” as a small child.  She watched them working in her neighbourhood in Kings Norton in Birmingham and wanted to be one.

Thanks to that experience she has traveled as far afield as France and India, cleaned streets, helped people keep their gardens tidy and supporting friends and neighbours.  Now she has a job because of her volunteer experience. Hers is just one of dozens of stories which explain why the Hawksley Young Volunteers were shortlisted for a Local Hearts Awards in October 2009.  For more, listen to the podcast below.

So we’ve made it to a full half a dozen  surgeries, cracking. Scroll down for a report on Surgery no 5.

If you belong to a Birmingham based community or neighbourhood group or charity please Come and join us for the May 13th 2009 Surgery.

Next Surgery: Wednesday, May 13th, 2009 drop in anytime between 5.30pm to 7.00pm at Fazeley Studios, 191 Fazeley Street, Digbeth, Birmingham, B5 6DR,  link to map. (not BVSC) It’s opposite the bond and a go kart track. Push the large pale blue door with the silver door knob.

So what happened last time?  Well, Paul Henderson took the photo above whilst Chris Ivens summed up the point of the surgeries rather neatly:

Q: What is a Social Media Surgery?  A: With an abundance of buzz-words at every tick and turn and an almost daily mention of twitter in the news we try to look at what technologies could really help your organisation and we’re here to explain in plain English what they are. It’s not a sales pitch nor are you obliged to do anything after the meet, I guess it’s the old cliché; ‘Giving Something Back’. If you come and find the session useful, please pass on the word so more people can benefit.

As with most of our surgeries, people went away having set up new blogs or picked up tips about how else they can use the social web to help their project, programme, campaign or neighbourhood.

Thanks to the brilliant advice and support we got last time it inspired us to put our Net.website up (just), and we’ll be along to discuss building on our Social support!

Tony and his team have now begun making good use of google maps.  Karen and Geoff Caine are the first people who’ve made the move from patient to surgeon, having now made good use of their newish blog for the City Centre Neighbourhood Forum, explored with google maps and begun to encourage people to use services such as the excellent fixmystreet.

It was a good evening for neighbourhood groups.  Ged Hughes of the Acocks Green Neighbourhood Forum came along, her first time at a surgery. She left saying she would love to come again and the following day created a blog for the forum. (Hurrah!).  The first post tells us that their AGM is on May 14th, the day after the next social media surgery. It also pointed me to another local group already using social media, the Acocks Green Focus Group.

Other neighbourhood interest came from the East Yardley Neighbourhood Forum who went away with a head crammed full of ideas and established this starting point for conquering the social web world. Also John Heaven was with us looking for help on how to build on what is already being achieved at Lozells.info.

Laura Creaven  of LUCIA Charity set up this personal blog and has got off to a roaring start. Her take on the surgery:

I have to say it was a fascinating meeting and I’m really glad I went. I’m all a bit keen about what we could achieve with it. So I’m a little excited about going to work tomorrow – sad isn’t it?!

Also with us was Mary from Birmingham Friends of the Earth and Attiya from the Health Exchange who left having set up an experimental personal blog.

The ever brilliant all-volunteer surgeons were Ben Waddington,  Nicky Getgood, Chris Ivens, Pete Ashton, Paul Henderson, Gavin Wray, Daniel Davis, Simon Whitehouse.  Neil Houston – who blogs about food – joined us for his first session and Rob Annable gave some great help on open source mapping. I love the way the people who help at the surgeries vary from month to month, so endless thanks for their help and a particular thank you to Diane from Fazeley Studios who also volunteers her time to keep the place open.   I always forget at least one person when I list these, so apologies in advance and please just tell me and I’ll put it right.

I’ve been asked by MADE to write 200 words for the Birmingham Post. They’re gauging opinion before the Technical and Environmental  Mayor of Copenhagen speaks in Birmingham next week. Klaus Bondam will be at Town Hall on April 6th to share with us how he expects Copenhagen to stays a wonderful place to live.

I was asked about an hour ago and the deadline is tonight.  Here’s a bashed out draft of what I fancy saying. Please encourage, discourage amend etc in the comments. Does anyone have details of that survey that put us the 2nd best place for social media behind, is it Chicago?

Is this a good place to talk?  It’s not a question we often ask about cities.  After all the whole point of a city is that we can connect, trade and work.  Non of that happens without talk, does it? No it doesn’t, and neither does innovation.

Conversation is about scale, it happens where it’s easy for people to gather in small groups.  The ICC is evidence that we know about audience on a grand scale, but how well do we do small scale gathering?

We need many places where we can meet, deliberately or by accident.  That means a city which is easy to walking but above all has many interesting and modestly scaled places that people want to go.   It means a tolerance of other’s ideas and interests, a city where people also like to listen.

These are partly planning issues and partly cultural issues. How good are our public services at setting the example and being interested in us, how good our our planners and designers at encouraging the interesting?

And of course we don’t just want to talk to ourselves. Birmingham needs take part in a global conversation.  So our schools need open access to the internet and our school teachers and pupils helped to have the confidence to take part in sharing and developing ideas with people across the planet.

Oh and Birmingham doesn’t have free internet access in the city centre, whatever our PR folk may so. So Birmingham Fizz needs to be turned of or turned into a proper free wifi service, so we can finally start hearing each other speak. 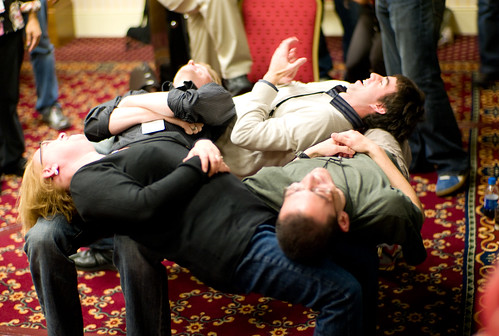