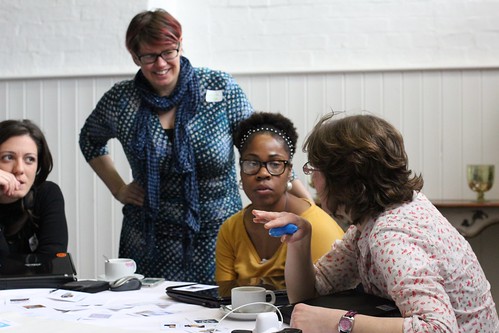 We looked at different platforms such as blogs, Youtube, Twitter and Facebook. Gave presentations on networking, sharing and listening and had brilliant guest speakers Shane McCraken of END_OF_DOCUMENT_TOKEN_TO_BE_REPLACED

Last week I talked to the Ma Social Media Students at Birmingham City University about social media surgeries for community and voluntary organisations. I was explaining how they emerged from a wide range of activity that was building social capital here in Birmingham.

It’s a story I’ve told before but never really in such a concentrated way – in fact I told it twice in one day. The students were a guinea pig for the talk I was planning to give at Michael Overduin’s Science Capital event on “Networks, Nodes and Knowledge: from local enterprise to global engagement”.

The slides are here but what I’d like to share if what one of Dave Harte’s students made from the talk. Dave shared the whole thing with his overseas students who study the degree remotely. He asked them to:

This week I would like the distance learning students to reflect on the talk by Nick Booth and consider how you might go about setting up a social media surgery in your own town. What would your strategy be? Have a read of Nick Booth’s ‘recipe’ listas a starting point.

Your response should be a short (5-10 mins) video that tells us the following:

This is a question about social capital and innovation, where is it, how does it happen. Can you nurture or grow both.  Dave highlighted one response from Jeff Sage.

Jeff  talked about how a group in London Ontario developed “Emerging Leaders” a network for connecting people.  As yu can see they also work with different agencies in the city to help improve their community.  Principles that struck a chord with the social media surgery ethos include:

never duplicate efforst of others or create silos and making mistakes should be a goal, rather than something you’re tryng to avoid.

Also very much inline with the work Tessy Britton is doing at social spaces and David Barrie’s Militant Optimists,

One coincidence – Michael Overduin, who asked me to compile the initial story on the surgeries – hails from Ontario.

These are my links for January 27th through February 4th: