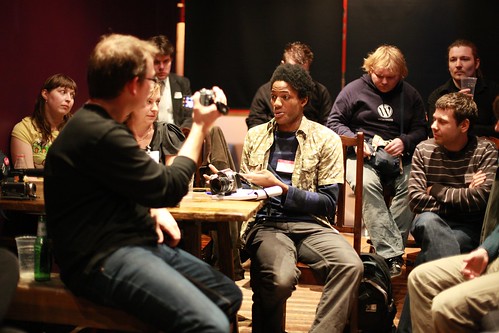 So what was I saying? I think I was appreciative of people’s patience with the formal bit of the evening. We had feedback from the brum group who went to Austin, Texas for SXSW. Our first two meetings had been nothing more than a chance to chat. Stopping everyone in full flow to get formal seemed a little odd, especially given how involved and passionate the conversations were. It worked though. Pete Ashton’s post here summarises reaction to what was a very enjoyable evening and also links to a video on the more formal bit from Andrew Dubber and these blog posts:

Stef Lewandowski: Roundup of ideas
Hemminac: “Badges for bloggers builds barriers?!”
Antonio Gould: Short post
Charlotte Carey: “the rather mischievous notes/observations I made”
Antonio Roberts: “I’m very interested in seeing what a coworking space, and the people running it, can offer a communtity who are almost completely unknowledgable when it comes to technology.”
Simon Hammond: “There was a lot of discussion about ‘evangelism’, ‘conversion’ and ’spreading the word’ about social media which struck me as odd language.”

Thank you also to Lloyd Davis for talking to us about the social media club he’s nurturing in London.

It’s called the Tuttle Club, a reference to the De Niro character in the movie Brazil – a guerrilla plumber who’s able to make the system work with simple, unbureaucratic applications of effort.

Different forms of what you might call Tuttleware have sprung up from the folk of the Birmingham bloggers group. Or as Pete puts it:
Paul Bradshaw built a Birmingham Bloggers Aggregator and a Birmingham Twitterers feed.
Lloyd reminds us in the comments of the Coworking Birmingham wiki that was set up a while back. It’s there for the using.
Pete Lewis has started a Brum Planet which appears to be a massive stream of stuff being produced online in Birmingham. Something for ambient browsing.
Mark Steadman brings us Blogging Brum: a group blog for Birmingham.

Charlotte mentioned that as a group we have a very high proportion of white men. Her research at BCU is looking at why women and people from ethnic minorities rarely appear at the head of the high value, high growth businesses in the digital and media sector. Any thoughts on how Birmingham bloggers meetings, events can involve a wider range of people please share them.

I don’t think that was all I said in the original post – but I need to get on with some editing. Thank you to Al at Rooty Frooty for staying open for us. Thanks for the comments so far (which is more than you can usually says before you’ve finished a blog post) and I might leave the last tweet to you: